Baptists in Disguise and Apostolic Succession... 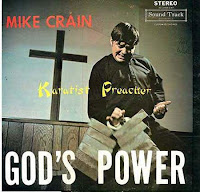 There is a new movement among Southern Baptists in my area. They graduate from the local seminary or bible college and start a "community church." These community churches usually have names like "Faith" or "Sojourn" or "Gateway" or "Grace" or some other generic name. However, when you read their statement of faith it is distinctly Baptist. Well, Baptist of the hellfire and brimstone type. Young couples come to the churches hoping for a type of open environment where they can learn their faith in this post-Christian world. Often times, they sink into a type of fundamentalism.

The ISM has a similar problem. Yes, I will call it a problem. It is the new influx of seemingly evangelical ministers who claim apostolic succession. These individuals wear the clothes and were ordained by bishops in the apostolic succession, but they have no concept of sacramental theology. This begs the question--why would they want apostolic succession of they do not believe that they are participating in a sacrifice on an altar? Or, sometimes they do believe in some type of sacramental theology but then dually emphasize the Bible and its superiority over tradition.

I believe there is a parallel with the Reformed Episcopal Church. Bishop George Cummins, the founder, stated very clearly that "I act as a Bishop, not claiming a jure divino right, or to be in any Apostolic Succession..." According to traditional Catholic theology (as mentioned previously) there must be an intention to "do what the church does." If you do not intend to ordain a sacrificing priest, do you do what the church does? That is not for me to say. But, it is pertinent given the large influx of evangelicals into the ISM.

I have no problem with Pentecostal preachers wearing Catholic garb. If that's your thing, live it up! Well, at least wear them correctly please. But, it's shaky ground then they claim to have apostolic succession without holding the sacramental deposit of faith that is dependent on that succession. Biblical literalism is, after all, only about a century old.

"We are not to credit these men, nor go out from the first and the ecclesiastical tradition; nor to believe otherwise than as the churches of God have by succession transmitted to us." - Origen, Commentary on Matthew (post A.D. 244).
Posted by Vagrant Vicar at 11:32 AM 1 comment:

A Homily About Listening

One of the readings today, depending on which lectionary you use, has the miracle of Jesus healing the deaf, mute man. This is regarded by female theologians as the greatest miracle of Jesus. He made a man listen! Still, out of the 37ish miracles that were documented in the New Testament this one was chosen. I think it is because listening was as difficult then as it is now. We live in a world where we are told not to listen to each other. We aren't supposed to listen to those that are politically different, especially during this election season, because "they're crazy." Other religions, too, are labeled as having no inherent value. We strive more than ever to reduce people to one common denominator. You're conservative, liberal, gay, straight, black, white, etc. The many complexities that make up you and your essence are not honored. You are just put into a box from which you can never escape. This, of course, makes it much easier to not listen to each other. This is a shame.

Similarly, while listening to each other we need to listen to God. We have a wonderful example from the Blessed Virgin Mary, whose birthday was celebrated yesterday. Mary was likely a girl in her early teenage years who wanted nothing more than to live with her bethrothed, Joseph, until the end of her life. Instead, she answered the Archangel Gabriel with the words "Let it be to me according to thy word." This simple action took her to many dark places. She saw her son, the only son she had ever known murdered as a common criminal. His friends and disciples were similarly murdered. She lived in excruciating emotional agony. Yet, she listened to God's will for her life. She listened.

The two cannot be mutually exclusive. Sometimes we hear each other and it is hearing the very voice of God acting through us. Who better than our sisters or brothers to let us know that we need to change our ways. Sometimes God tells us that we must reach out to each other. Regardless of how it happens, the take home message today is that we must listen. It can't be a half-hearted listening, but it must be fully aware and sincere. We don't have to agree with the message, but we are duty bound to listen to the story. To care about the speaker regardless of their background or differences. Perhaps in this we will hear the very voice of God.
Posted by Vagrant Vicar at 7:57 PM No comments: