A Brief Mass for Meditation 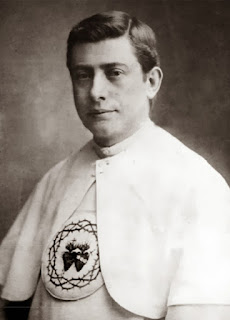 From Jesus, King of Love by Fr. Mateo Crawley-Boevey, SS.CC.

Now, I am going to let you in on a secret – the secret of my spiritual life. When I travel on the train, I say, ten, twenty ‘Masses of St. John’ – Masses in honor of the Blessed Trinity. There is no prayer like that. I have but three devotions: My Mass, my breviary, my rosary. The breviary is beautiful, but you cannot compare it with the Mass. There is no prayer like the Mass. As I travel, I offer my Mass on the altar of the holy Will of God, offering it in union with the thousands of priests saying Mass continuously, perpetually. I am tired, I cannot prepare conferences – I offer Mass instead. I said four or five Masses this morning. I do it the whole day. It unites my heart, my will with priests at the altar. When I awake during the night, the first thing I do is unite myself with the Mass being celebrated at that moment. I say the Offertory, Consecration, and Communion prayers. I call this the "Mass of St John." I hope to die saying Mass – between two consecrations.

Now you might ask, "What do you mean by the 'Mass of St John?'" I call this practice
"The Mass of St. John" only to give it a title. It is really Jesus' Mass. What was the Mass offered by Jesus? The Mass offered by Jesus at the Last Supper was the most simple of Masses, the shortest of Masses, lasting but a few minutes. St. John's Mass, as He offered it for Our Lady, was the same--short, simple, consisting however of the same three elements, the same three prayers: Offertory, Consecration, and Communion.... That is Mass. All the rest is frame. If at the altar I said only those prayers, my Mass would be a valid Mass. I can't do that because it is forbidden. But it would be a genuine Mass.

Learn these prayers by heart and then during the day you can live the wonderful grace of your Mass. You have a few moments free –say a Mass of St. John. You wake up at night – say a Mass. You come into church for a visit or to make your adoration - begin with a Mass... At the end of the day offer a perfect act of thanksgiving, Holy Mass.

... I remember preaching in a big community in California. The Mother Superior said to me one day, “Father, I want to thank you. Yesterday after your conference about Holy Mass I went to the infirmary to see a poor sister who suffers terribly and who cannot sleep at all, especially during the night. She was smiling. Mother, I have learned the secret of how to pass the night – the Mass of St. John. Thank Father for me for having told us about it.”


Offering of the Host
Accept, O Holy father, Almighty and Eternal God, this spotless host, which I, Your unworthy servant, offer to You, my living and true God, to atone for my numberless sins, offences, and negligences; on behalf of all here present and likewise for all faithful Christians living and dead, that it may profit me and them as a means of salvation to life everlasting. Amen.

Offering of the Chalice
We offer unto Thee, O Lord, the chalice of salvation, entreating Thy mercy that our offering may ascend with a sweet fragrance in the sight of Thy divine Majesty, for our own salvation, and for that of the whole world. Amen.

The Consecration
“For this is my Body.”
“For this is the chalice of my Blood of the new and eternal testament, the mystery of faith; which shall be shed for you and for many unto the remission of sins.”

Domine, Non Sum Dignus
Lord, I am not worthy that Thou shouldst enter under my roof; but only say the word, and my soul shall be healed.

Posted by Vagrant Vicar at 8:15 AM No comments: