The Mass as Sacrifice

"When you see the Lord immolated and lying upon the altar, and the priest bent over that sacrifice praying, and all the people empurpled by that precious blood, can you think that you are still among men and on earth? Or are you not lifted up to heaven?” (The Priesthood 3:4:177 [A.D. 387])." - St John Chrysostom 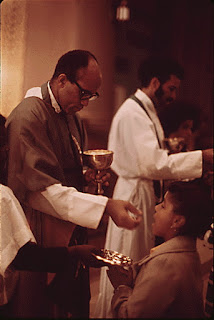 I opened this post with a quote from St. John Chrysostom because it is, for me, a perfect summary of what we believe about the Holy Mass. Unfortunately, in some quarters, it has become more common to emphasize the Mass as meal and the altar as table. While these terms are accurate--the Mass is a "Heavenly Meal" on the "Table of the Lord" overuse of them can lead to a de-emphasis of the Mass as sacrifice.

Ultimately, if the Mass is not a sacrifice then we are not emulating the commandment at the Last Supper to "do this in memory of me." True, there was in the Early Church (and still today in the beautiful custom of the Eastern Church with the antidoron) the offerings of agape feasts both closely related to the Eucharist and, later, separated from it. Yet these remained distinct from the sacrificial action which was limited to the Body of Christ (excluding, for example, catechumens) and which required baptism, penance, and other expectations.

How, then, did we get here? The reformers had some effect by their denial of the sacrificial nature of the Mass. Still, too, did the liturgical reformers who utilized non-sacrificial terminology in liturgical revisions. This created a de-emphasis on the sacrificial nature of the Mass. While I prefer an ad orientem celebration of the Mass I don't think our problems hinge on that single issue. There are numerous ones which have gotten us to our current level of informality.

So, then, what is the solution?

1. Proper catechesis. Emphasize in homilies, writings, and other venues the importance of the Holy Mass as sacrifice. Train those entering the Church that the Mass is a sacrificial act. I was recently told be a Catholic convert "I became Catholic but I still don't believe it's really the Body of Christ." That is the wrong attitude, obviously.

2. Appropriate liturgical atmosphere. Even if you're renting space or meeting in a non-liturgical location you can still take steps to ensure the Mass is reverently celebrated. 1. Create an atmosphere of holiness that is separate from peoples' ordinary lives, unique, and reflective. 2. Use the best resources possible when celebrating the liturgy. This means dignified vestments, reverent materials, and proper respect for holy vessels and objects. ABSOLUTELY NO SCARF STOLES (I'm looking at you RCWP). 3. Choose music and other supportive material that emphasizes the holiness of the Mass. If I have to hear "Gather Us In" one more time...

3. Use clergy appropriately and generously. The beauty of the autocephalous Catholic movement is that we can ordain people more easily. Find appropriate people in your community to act as deacons and priests and encourage their vocation. We don't have to utilize "eucharistic ministers" because we can foster people's vocations without the rigid strictures of the mainstream. This is not only beneficial for the liturgical setting, but the faithful have access to spiritual benefits not available from the laity (like blessing children or catechumens who can't receive the Eucharist--which can't be done by "eucharistic ministers.")

4. Emphasize the holiness of the Eucharist. It has become fashionable to receive Holy Communion in the hand. However, this, too, can do much to de-emphasize the sacrifice of the Mass by promoting familiarity. And familiarity, as we know, can breed contempt. If the Eucharist is received it can be received on the tongue with great reverence. There is less discussion about the method of receiving the Eucharist. While I prefer kneeling, standing has long been the tradition in the Eastern Church. Encouraging a bow, genuflection, or reverence before receiving Holy Communion is laudable.

5. Create a setting of prayer. In all community gatherings or other events, ensure that prayer is offered and that prayer is at the heart of the event (as it is ideally within our lives). Whether it is a parish picnic, retreat, or any other setting use it as a chance to provide reverent prayer. Also use time-honored liturgies, not those created on the fly. As I've previously mentioned--there is a reason why we use liturgies which were created and prayed by saints and within the tradition of the Church. 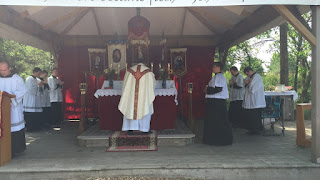 There are always steps that can be taken to ensure that the sacrificial nature of Mass is honored. These can be done regardless of the Mass rite itself (whether Novus Ordo, Tridentine, etc.). To some, these items may not be important. "People are starving" is a refrain heard whenever one talks about liturgy. They are starving... spiritually starving. And they are starving because of our mediocre liturgies and lack of prayerful atmospheres. 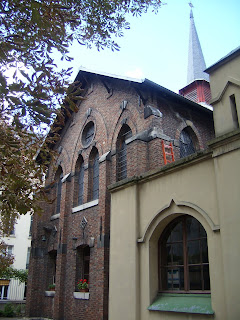 As I have previously mentioned, I have a continual interest in Orthodox Theology. My interest stems from the lack of scholasticism found in the tradition. My theological training was primarily oriented theologically and cerebrally, and I have found in Orthodox writings a training which is of the heart. Despite this training, I will admit that I find the liturgical tradition to be esoteric and complex. This could be because it is, indeed, or complex, or it could be because I am a Westerner too set in my ways for change. Despite these feelings, I do deeply love the mystical tradition of the East.

For me, there is no place where this theology has been more developed than in Paris. In particular, the St. Sergius Institute has created some of the very best writers. These are individuals who wrote from an Eastern perspective while being sensitive to a Western audience. Since 1925 the Institute has fostered an intellectual tradition that is both thoughtful and mystical.

Despite being composed of Russian émigrés, the work produced was/is broad-minded and a bridge to the West. Much of it is focused more spiritually and mystically than within a rigid theological framework, although (as with Clement) theology still informed much of the writing. I believe we have much to learn from the luminaries of the school about how to deepen our spirituality.

I wanted to list some of my favorite writers in the hope that it will be helpful for someone. This is not an exhaustive list nor is it very detailed. There are already books, articles, and numerous internet sites about the authors below. I simply wanted to provide a very brief detail and the book(s) which influenced me personally.

Nicolas Afanassieff - Fr. Afanassieff was a priest who gained some attention because of his eucharistic theology. His emphasis on the local church provided excellent insight into the practices of the Early Church, and he acted as an observer at Vatican II. his book "The Church of the Holy Spirit" is an insightful look into local churches.

Sergei Bulgakov - Fr. Bulgakov is most noted for his Sophiology. I am least familiar with Bulgakov's writings.

Olivier Clément - Professor Clément's focus was heavily influenced by Mystical Theology. A theologian, he believed in the synergy of theology and prayer and that prayer was rooted in theology. His book "Roots of Christian Mysticism: Texts from Patristic Era with Commentary" provides an in-depth look at authentic Christian mysticism.

Paul Evdokimov - Professor Evdokimov's magnum opus, for me, is the work "Orthodoxy." In it, he provides insight into the Orthodox faith that is neither dogmatic in a Western mold but conveys the depths and richness of Orthodoxy.

Georges Florovsky- Fr Florovsky focuses, in my estimation, much on the Russian church itself. His "The Ways of Russian Theology" provides a deeper look at how the Russian Church formed both historically and in it's relationship with the state.

Vladimir Lossky - Professor Lossky was my personal favorite theologian. Lossky's focus on mystical theology culminated in the work "The Mystical Theology of the Eastern Church." This is my suggested book on those looking to deepen their spiritual understanding when looking East. Lossky's genius is in writing for Western audiences while not diminishing the importance of the subject. His "Orthodox Theology: An Introduction" is also an excellent starting point for those looking East. Lossky was more closely affiliated with the St. Dionysius Theological Institute which taught in French.

John Meyendorff - Fr. Meyendorff was one of the more prolific writers and, as he settled in America, luckily has much of his work in English. Fr. Meyendorff's insights into the history and positions of the Orthodox Church is still pertinent today. His book "Byzantine Theology" as well as his historical works are foundational works.

"To be freed from every touch of sin and grow continually in grace, it is necessary to be rooted more and more in the unity of nature which has Christ Himself for its hypostasis. The sacrament of the body and the blood is a realization of the unity of our nature both with Christ and, at the same time, with all the members of t the Church." - Fr. Vladmir Lossky